Ray Caesar, Gallery House… Click on image above to open the youtube video featuring the opening at the Corey Helford Gallery.

A string orchestra — composed of four artists performs for the opening with an equally impressive wardrobe–gorgeous!

Dante Nuno of Fire and Icing delivers a cake driving 8 hours to LA for the opening.  Above is a rendition of Ray Caesar’s Descent and below are his interpretation of the Castor and Pollux imagery.

Myself and Dante Nuno…did I mention the cake is 100% edible?!  It was later consumed at the end of the opening.

Mark Murphy : Scribble 08: Ray Caesar Interview In the Light: Ray Caesar recently exhibited 30 digital paintings, “Dangerous Inclination,” at the Corey Helford Gallery. Ray was in good spirits and the c...
Posted by Ray Caesar at 9:50 AM No comments: 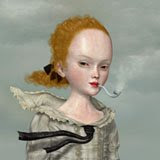